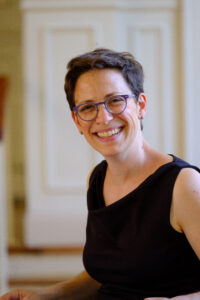 Debra Nagy has been deemed an artist “of consummate taste and expressivity” (Cleveland Plain Dealer). She is the founder of the Cleveland-based ensemble Les Délices and plays principal oboe with the Handel & Haydn Society, Apollo’s Fire, and many other ensembles. Inspired by a creative process that brings together research, composition in historical styles, improvisation, and artistic collaboration, Debra creates programs that “can’t help but get one listening and thinking in fresh ways” (San Francisco Classical Voice). Recent projects have included a multimedia productions of Machaut’s Remede de Fortune created in collaboration with Blue Heron, a critically-acclaimed CD combining jazz and French Baroque airs called Songs without Words, and The White Cat, a pastiche Baroque opera with puppetry and projections based on Marie Catherine d’Aulnoy’s 1690s feminist fairytale. Debra was recently recognized with a 2022 Cleveland Arts Prize and received the 2022 Laurette Goldberg Prize from Early Music America for her community outreach work with Les Délices on the web series SalonEra. Debra has recorded over 40 CDs with repertoire ranging from 1300-1800 and has had live performances featured on CBC Radio Canada, Klara (Belgium), NPR’s Performance Today, WQXR, and WGBH. When not rehearsing, performing, or dreaming up new projects, Debra can be found cooking up a storm in her kitchen or commuting by bike from her home in Cleveland’s historic Ohio City neighborhood.