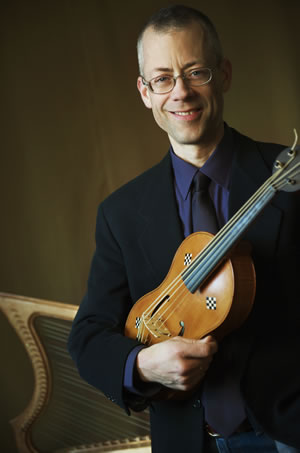 Scott Metcalfe has gained wide recognition as one of North America’s leading specialists in music from the fifteenth through seventeenth centuries and beyond. Musical and artistic director of Blue Heron since its founding in 1999, from 2010 through 2019 he was also music director of New York City’s Green Mountain Project (Jolle Greenleaf, artistic director), whose performances of Claudio Monteverdi’s Vespers of 1610 and other Vespers programs devised by Metcalfe were hailed by The New York Times as “quite simply terrific” and by The Boston Globe as “stupendous.” He has been guest director of TENET (New York), the Handel & Haydn Society (Boston),  Emmanuel Music (Boston), the Toronto Consort, The Tudor Choir and Seattle Baroque, Pacific Baroque Orchestra (Vancouver, BC), Quire Cleveland, and the Dryden Ensemble (Princeton, NJ), in repertoire ranging from Machaut and Du Fay through Monteverdi, Charpentier, Purcell, and Bach, and he conducted Early Music America’s Young Performers Festival Ensemble in its inaugural performance at the 2011 Boston Early Music Festival.

Metcalfe also enjoys a career as a baroque violinist, playing with Cleveland’s Les Délices (dir. Debra Nagy), Québec’s L’Harmonie des Saisons (dir. Eric Milnes), and other ensembles. He has taught vocal ensemble repertoire and performance practice at Boston University and Harvard University and served as director of the baroque orchestra at Oberlin Conservatory, and in 2019-20 he was a visiting member of the faculty of Music History at the New England Conservatory.

Metcalfe received a bachelor’s degree from Brown University (1985), where he majored in biology, and a master’s degree in historical performance practice from Harvard (2005). His Harvard thesis is a study of music-making in 16th-century Mexico before and after the fall of Tenochtitlan to the Spanish. Metcalfe’s scholarly work centers on the performance practice of medieval and Renaissance vocal music, including articles on cleffing and pitch before 1600 in the Journal of the Alamire Foundation and two chapters in the long-forthcoming collection Music, politics, and religion in early seventeenth-century Cambridge: the Peterhouse partbooks in context (Woodbridge: Boydell and Brewer). His edition of Francisco de Peñalosa’s Precor te, domine Jesu Christe was published by Antico Edition in 2017 and he has also edited the twelve unique songs in the newly-discovered Leuven Chansonnier for the Alamire Foundation (Belgium). Perhaps uniquely in the early music world, he is lead author of an article published in the Annals of Botany. A new edition of the songs of Gilles de Bins, called Binchois (c. 1400-1460) is in preparation—a long-term project.

Metcalfe lives in Watertown with his family and enjoys biking, hiking, and all sorts of outdoor activity.