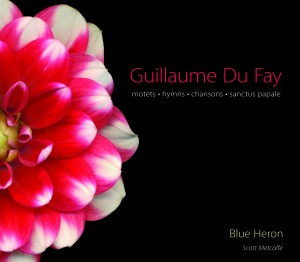 Blue Heron’s debut CD offers an entrancing selection of music by the greatest composer of the 15th century, Guillaume Du Fay (c.1397-1474). The program includes three isorhythmic motets (Apostolo glorioso, Rite majorem Jacobum canamus, and Ecclesie militantis), the glorious, large-scale Sanctus “Papale” in its first recording in three decades, two hymns with alternatim plainchant verses, and a generous sampling of secular songs. While the disc is mostly devoted to the music of Du Fay, it also includes a song by Du Fay’s contemporary Hugo de Lantins (Mon doulx espoir), and a marvelous motet-chanson by his friend and colleague of the next generation, Johannes Ockeghem (Permanent vierge). The music was recorded in September 2006 at the Church of the Redeemer in Chestnut Hill.

Medieval music, early and late, from France and Spain. The Du Fay discography continues to grow apace: the number of groups regularly performing his music and their quality are truly astonishing. One of the most impressive of these discs to have come my way lately is a collection by the American ensemble Blue Heron, under Scott Metcalfe, Guillaume Du Fay: Motets, Hymns and Chansons (BHCD 1001, rec 2006, 74′). A 14-member group, with three instrumentalists to help out, Blue Heron produces a wonderfully clear sound that is nevertheless not lacking in depth, and the highlights of the recording—in that they display these qualities to perfection—are the so-called ‘Sanctus Papale’ (the Sanctus ‘Ave verum corpus’,possibly written for the consecration of Santa Maria dei Fiore in Florence in 1436) and Rite majorem, in honour of St James. The chansons are also beautifully sung, by smaller groups, but again with a pleasingly full sound. An extremely impressive recorded debut.
Ivan Moody, Early Music | August 2008

The Want List 2007 [five favorite releases in 2007] The Dufay disc would be worthy of inclusion even if it were not an outstanding debut of the ensemble and its label.
J. F. Weber, Fanfare | November/December 2007

The most attractive aspect of this recital is its feeling of immediacy and freshness.… For me, the high points are the Sanctus Papale, for which it is very welcome to have such a confident and poised rendition; and some of the later songs, for example Malheureux cuer, que veux tu faire, and the cheeky Puisque vous estez campieur… More, please.
Fabrice Fitch, Goldberg | August/September 2007

This debut marks Blue Heron as a leading new actor in the field of early Renaissance music, both for studying the sources and bringing them to life. Altogether, this is one of the finest Dufay collections to come out in recent years…
J. F. Weber, Fanfare | September/October 2007

This disc shows off the mellifluous beauty of much of the music. It is somewhat laid-back, but not overly so. If I say that it is an ideal introduction to Dufay, I don’t wish to discourage more experienced listeners. It’s a good, unhackneyed program: buy it!
Clifford Bartlett, Early Music Review (UK) | April 2008