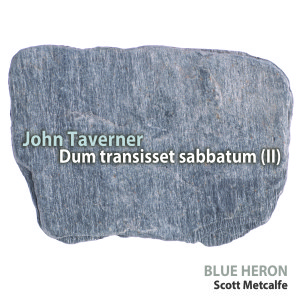 This digital-only single features the second setting of the Easter respond Dum transisset sabbatum by John Taverner (c.1490-1545). Like the music recorded on Blue Heron’s 5-CD series Music from the Peterhouse Partbooks, this is a gorgeous work from the golden age of pre-Reformation English cathedral music. (Much music from the period has been lost.) The text describes the three women arriving at Jesus’s tomb on Sunday morning, and Taverner’s setting, which alternates between plainchant and five-voice polyphony, captures the mystery and awe of the biblical story. Research indicates that sacred polyphony in 16th-century England was generally sung at a pitch somewhat higher than a semitone above the modern standard of A440; we sing at approximately A=465.