Music from the Peterhouse Partbooks, Volume 4 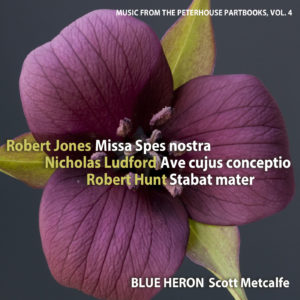 “As on previous releases, the singing is both precise and fluid, immaculate and alive”
Alex Ross, The New Yorker

The fourth installment in Blue Heron’s 5-CD series of Music from the Peterhouse Partbooks contains the world premiere recording of the only surviving Mass of Robert Jones (fl.1520-1535), who was employed in the royal chapel during the reign of Henry VIII. Lyrical and mellifluous, the mass is a mature work, revealing a Master composer at the height of his power. The completely unknown composer Robert Hunt left behind a stunning work that brilliantly highlight the drama of the Stabat mater story. The recording is part of a 5-CD project under way since 2010.