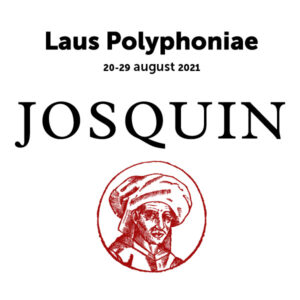 By special invitation, the Boston-based vocal ensemble Blue Heron will be featured in the 2021 season of Laus Polyphoniae, an annual international music festival focused on Renaissance polyphony presented by AMUZ (Flanders Festival Antwerp). AMUZ is a center of excellence which organizes concerts, courses, lectures and other activities in the performance of polyphonic music according to historical practice. This year’s festival celebrates the music of Josquin des Prez on the 500th anniversary of his death.

Blue Heron will present Josquin’s Missa Fortuna desperata, based on an Italian song, alongside half a dozen settings of Dulces exuvie, Dido’s last words from Virgil’s Aeneid. The juxtaposition is inspired by the ideas of Fortune, Fate, and Fame presented in the music of Josquin and his contemporaries at the Habsburg-Burgundian court during the years around 1500.

“Even in his own time, Josquin des Prez and his music had a magical aura,” notes AMUZ. “The composer let a breath of fresh air blow through Franco-Flemish polyphony. His music excels in compositional ingenuity, clear form, melodious sound, and a profound relationship between text and music. But as his fame grew, so did the number of compositions falsely attributed to him. As a festival specializing in polyphony, we have the duty to place Josquin in a new light.” Blue Heron is highly qualified to shine new light on Josquin since, as AMUZ notes, Blue Heron’s artistic director, Scott Metcalfe, is “undeniably a specialist in this repertoire” and an internationally recognized leader in the performance of Renaissance polyphony. In the recent publication of Il Giornale della Musica, written by Paolo Scarnecchia and featuring Scott Metcalfe, can be accessed (and translated into English) at: https://www.giornaledellamusica.it/articoli/laus-polyphoniae-celebra-il-quinto-centenario-della-morte-di-josquin-desprez.

Laus Polyphoniae 2021 will be a hybrid festival that will showcase the most diverse works by Josquin. Ensembles from the Low Countries will perform live concerts, and Laus Polyphoniae is touring the world for the first time this year by streaming from Japan, the United States, and the United Kingdom. In addition, the festival will also showcase a series of documentaries about the 12 Masses securely attributed to Josquin.

For information on the festival and to secure tickets, please log on to https://amuz.be/en/register-for-josquin-2021/. The concert will be available for free on the AMUZ website for one month.

ABOUT BLUE HERON
The Boston-based vocal ensemble BLUE HERON has been hailed by Gramophone (UK) as “a revelation … fresh, dynamic and vibrant … urgent and wonderful music-making of the highest order. ” The ensemble presents a wide repertoire from plainchant to new music, with particular specialties in 15th-century Franco-Flemish polyphony and early 16th-century English sacred music, and is committed to vivid live performance informed by the study of original source materials and historical practices. With a catalog of twelve recordings, Blue Heron is the first group outside of Europe to receive the Gramophone Classical Music Award for Early Music (2018).