Mehmet Ali Sanlıkol and the Art of Blending Musical, Stylistic, and Cultural Worlds

For Blue Heron’s third and final Spotlight Session lecture series of 2021-22 season, Grammy-nominated composer and New England Conservatory faculty member Mehmet Ali Sanlıkol will offer a detailed introduction to his composition DEVRAN. Written in 2017 as a response to growing anti-Muslim sentiment in the US and the West at large, DEVRAN is a polyphonic work that marries Renaissance counterpoint to elements of traditional Middle Eastern music. The two texts in DEVRAN are drawn from Sufi devotional songs transcribed in a 17th-century collection. “In the Turkish language, the word DEVRAN can refer to the cycle of life, to life itself, and it has an immediate connection to Sufism, Islamic mysticism, and the dervishes,” Sanlıkol explains. “It refers to the cyclical nature of coming and going.” The piece’s repeated patterns are derived from those that dervishes would use in their ritual whirling meditations.

An email with links and instructions will be sent 48 hours in advance of the Spotlight Session.

DEVRAN will be featured on the last program of Blue Heron’s concert season, “Many Voices,” a celebration of diverse voices and styles, April 22 and 23, 2022.

BLUE HERON has been acclaimed by The Boston Globe as “one of the Boston music community’s indispensables” and hailed by Alex Ross in The New Yorker for its “expressive intensity.” The ensemble ranges over a wide repertoire from plainchant to new music, with particular specialties in 15th-century Franco-Flemish polyphony and early 16th-century English sacred music, and is committed to vivid live performance informed by the study of original source materials and historical performance practices. Blue Heron offers a catalog of twelve recordings and is the first group outside of Europe to receive the Gramophone Classical Music Award for Early Music (2018). Blue Heron is Renaissance vocal music for the 21st century. For more information and photos, go to www.bluheron.org

Grammy-nominated composer and New England Conservatory faculty member Mehmet Ali Sanlıkol hails from Cyprus and Turkey. A jazz pianist, multi-instrumentalist, and singer, Sanlıkol has been praised by critics all over the world for his unique, pluralist, multicultural and energetic musical voice. The Boston Globe noted that Sanlıkol’s “music is colorful, fanciful, full of rhythmic life, and full of feeling. The multiculturalism is not touristy, but rather sophisticated, informed, internalized; Sanlıkol is a citizen of the world … who could play decisive role in music’s future.” Sanlıkol has composed for and performed with international stars and ensembles including Dave Liebman, Bob Brookmeyer, Anat Cohen, Esperanza Spalding, Billy Cobham, Antonio Sanchez, Gil Goldstein, Tiger Okoshi, The Boston Camerata, The Boston Cello Quartet, A Far Cry, American Composers Orchestra, Okay Temiz, Erkan Oğur, and Brenna MacCrimmon. 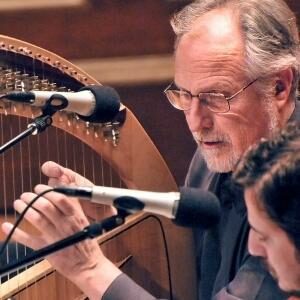 Sanlıkol’s Spotlight Session will be hosted by special guest Robert Labaree, Emeritus faculty, New England Conservatory, where he also founded and directed the global music series of the NEC Intercultural Institute (1991-2019), and the NEC 2050 Forum (2013-18), which explored the future of music in the context of changing climate and society. In 1980, and again in 2003, he co-founded two ensembles specializing in the music of the Middle East, which together produced more than a dozen CDs and DVDs. His research and writing in ethnomusicology and musicology have included studies of improvisation, Turkish music, and the links between music and biology.