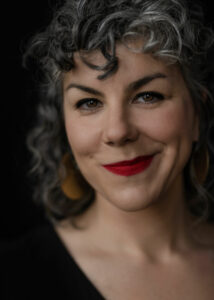 Praised for her “warm, colorful mezzo” (Opera News), Sophie Michaux has become one of the Northeast’s most versatile and compelling singers, at home in an eclectic span of repertoire ranging from grand opera to French cabaret songs. Sophie’s recent engagements include collaborations with the Boston Early Music Festival, Blue Heron, Lorelei Ensemble, Bach Collegium San Diego, Palaver Strings, and Ruckus, as well as a solo recital of Barbara Strozzi’s music at the Fondazione Cini in Venice, Italy. She won second prize at the 2021 Handel Aria Competition in Madison, Wisconsin, and the William Grogan Award at the 2022 Lyndon Woodside Oratorio-Solo competition. She has sung under the baton of Andris Nelsons, Thomas Adès, Leonardo García Alarcón, and Lidiya Yankovskaya, among others. This season, she will premiere Her Story by Julia Wolfe with the Boston, Chicago, Nashville, and San Francisco Symphony Orchestras, with the Lorelei Ensemble.