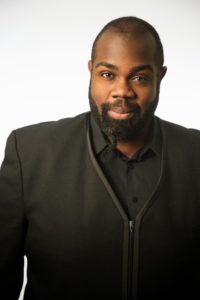 Countertenor Reginald L. Mobley fully intended to speak his art through watercolors and oil pastels until circumstance demanded that his own voice should speak for itself. Since reducing his visual color palette to the black and white of a score, he’s endeavored to open up a wider spectrum onstage. After starting his classical music career as a member of twice Grammy-nominated ensemble Seraphic Fire, Reggie has appeared with the Academy of Ancient Music, Agave Baroque, Bach Collegium San Diego, Calgary Symphony, Monteverdi Choir & English Baroque Soloists, Pacific Music Works, the Royal Scottish National Orchestra, Seattle Symphony, TENET, and the Handel & Haydn Society. With the latter he had the honor of becoming the first Black person to lead H&H in its Bicentennial year. Recent appearances include Bachfest Leipzig, Festival Berlioz, Early Music Vancouver, Thüringer Bachwoche, Portland Bach Experience, and the Boston Early Music Festival. Ahead lie performances with St. Paul Chamber Orchestra, Philharmonia Baroque, Musica Angelica, Bach Akademie Stuttgart, Gaechinger Cantorey, Chicago’s Music of the Baroque, and a recital of the music of Black American composers with keyboardist Henry Lebedinsky at the Musée d’Orsay in Paris. Recent recording projects include an all-Handel disc featuring the Ode to the Birthday of Queen Anne and the Utrecht Te Deum and Jubilate with Bach Akademie Stuttgart led by Hans Christoph Rademann and Italian chamber duets of Agostino Steffani led by harpsichordist Jory Vinikour. Never bound by conventional countertenor repertoire, Reggie has a fair bit of non-classical work in tow. His first professional work was in musical theatre and while working in Japan (as a Singer/Actor for Tokyo Disney) he performed cabaret shows of gospel, jazz, and torch songs in jazz clubs around Tokyo. Since moving in Boston, a strong devotion to social and political activism has awoken and become a part of everyday life. As a member of NoBoston2024 and allied with No Boston Olympics, Reggie was able to lend his strength to the effort to reject the 2024 Olympic Games bid that was “awarded” to Boston. That and time volunteering in local political campaigns has helped focus a desire to make a difference within the arts, particularly with the massive inequality regarding race, gender, and sexuality within the classical music industry.