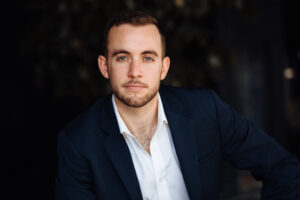 James Reese is a versatile and thoughtful young tenor specializing in baroque repertoire. Highlights of his 2022-23 season include a debut at the Boston Early Music Festival, where he will appear in chamber operas of Lully and Charpentier and will sing Mercure in the North American premiere of Henry Demarest’s Circé, and a debut with the Madison Bach Musicians, in addition to appearances with Philharmonia Baroque Orchestra, the American Bach Soloists, and TENET Vocal Artists. James will also present numerous recitals with his friend and close collaborator, pianist Daniel Overly, with whom he made a debut at the Philadelphia Chamber Music Society in 2022. Recent reviews have called James’s singing “captivating” (The Broad Street Review) and “splendid” (San Francisco Chronicle). He is a graduate of Northwestern University’s Bienen School of Music and holds a masters degree from Yale University’s School of Music, where he studied with James Taylor at the Institute of Sacred Music.