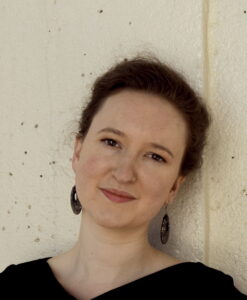 Elena Mullins is a Cleveland-based performer and teacher with a passion for early music. She has appeared with Les Délices, The Newberry Consort, Three Notch’d Road, Early Music Access Project, the Indianapolis Baroque Orchestra, and Apollo’s Fire, and co-founded the medieval ensembles Alkemie and Trobár. She holds a DMA in Historical Performance Practice from Case Western Reserve University and a BA in Musical Arts from The Eastman School of Music. She returned to CWRU in 2016, where she directs the Early Music Singers, and teaches classes on baroque dance, medieval music history, and the development of musical notation. Since 2019 she has also taught on the voice faculty at Cleveland State University.