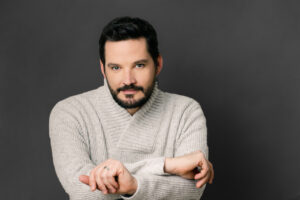 Hailed for his “voice of seductive beauty” (Miami Herald), baritone David McFerrin has won critical acclaim in a variety of repertoire. His opera credits include Santa Fe Opera, Seattle Opera, Florida Grand Opera, the Rossini Festival in Germany, and numerous roles with Boston Lyric Opera and other local companies. As a concert soloist he has sung with the Cleveland Orchestra, the Israel Philharmonic, and the Handel & Haydn Society, and in recital at the Caramoor, Ravinia, and Marlboro Festivals. Last season’s highlights included performances of Domenico Cimarosa’s monodrama Il Maestro di Capella with Boston Baroque, Monteverdi’s dramatic scena Il Combattimento di Tancredi e Clorinda with the American Bach Soloists, Handel’s Judas Maccabeus with Berkshire Choral International, and the role of the Devil in Stravinsky’s A Soldier’s Tale with the Aston Magna Music Festival. David has been a member of Blue Heron since 2011. He lives in Natick, Massachusetts, with his wife Erin, an architectural historian and preservation planner, their daughter Fiona, and black lab Holly.