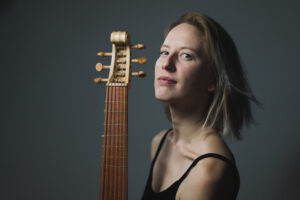 Anna Danilevskaia, medieval fiddle and Renaissance viol player, a specialist in repertoires from the fourteenth to the seventeenth centuries, was born into a family of musicians. She grew up surrounded by early music, specifically medieval repertoires, in Metz, France, and began her musical training at the age of six, playing different instruments. At the age of fifteen she started to play the fiddle and, shortly after, the viola da gamba. She studied with Pedro Memelsdorff in Barcelona, and later at the Schola Cantorum Basiliensis, focusing on medieval fiddle. She then completed her studies with a master’s degree in early viols with Paolo Pandolfo. In 2014 she founded her own group, Sollazzo, dedicated to the music of the Middle Ages and the early Renaissance. This first project as an ensemble director led Anna to explore different ways of approaching her chosen repertoire and allowed her to develop a musical language which has been called “unique, daring and yet respectful” by critics.